This is the third in a series on 1 Peter. The series begins here.

As I started down the hill this morning, my shadow fell long and skinny in front of me. For two happy seconds, I thought Good. Maybe those five pounds from vacation are already evaporating. That thought was short-lived. I knew perfectly well that those five pounds are still there and that maybe tomorrow morning, depending on the time and place and the angle of the sun, my shadow will be short, square, and quite pudgy. 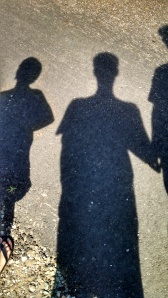 A silly lesson, maybe, but don’t we too often believe distorted images of who we are? We allow the people around us, the current culture, and the mood of the day dictate how we see ourselves, what we think of ourselves. We let the outside world or our own inner world—both constantly shifting and unreliable—paint the picture of who we are. Even worse, we sometimes believe those shadowy, false portrayals and live accordingly.

As we read 1 Peter, hear what God thinks about us, and how He sees us …. And isn’t God’s view the most solid and dependable portrayal of who we are?

God the Father knew you and chose you long ago, and his Spirit has made you holy. As a result, you have obeyed him and have been cleansed by the blood of Christ (1 Peter 1:2).

You are known and chosen. God the Father knows you better than anyone, and He chose to make you part of His family.

And He declares you cleansed.

Who of us can say that? Who can wipe their slate clean? In our human interactions, we often wish for a clean slate in our relationships. We would like to wipe out so many things, purge our history, start over, have a fresh start. We ask forgiveness, hoping to erase the wrong we’ve done. But between humans, we all know how difficult it is to gain a clean slate. Folks don’t let us forget our past too easily. We don’t let ourselves forget our past. We carry the burden far too long.

To be cleansed of the past, of all failures and shortcomings and outright wrongs we’ve done—can that happen?

God says it has happened for you and me. We can hardly grasp this truth. Yet God says it is so. Will we accept His word on this? What Christ did for us makes us clean. He was here for one thing—to wipe out all account of guilt and present us to God, scrubbed and spotless.

That one act blotted out the record of our past. Now He continues to cleanse us daily as we ask His forgiveness for the times we still fail Him. Christ’s own Spirit lives within, washing, purging, scrubbing, changing us.

And His Spirit working in us sets us apart as belonging to Him. Made holy. Dedicated to Him. That’s the meaning of the word holy. He began the relationship; He initiated this adoption. His Spirit comes to live in us and seal the relationship. The Lord looks at us—and says, “I am your God, and you are my people.”

Given a new life

All praise to God, the Father of our Lord Jesus Christ. It is by his great mercy that we have been born again, because God raised Jesus Christ from the dead (1:3).

It is great mercy, indeed, that gives us this chance at a new life. How many people wish for a new life, wish to be something other or more than they have come to be? But who really gets such a chance?

We all were born into the line of Adam, into a genealogy that turns it back on God and rebels and will die as a result. We had no choice in this first birth. The path for the family of Adam was set by that man’s choice in the Garden.

Yet God gave us the chance for another life—a birth into the family tree of Jesus. Because Jesus made a choice in another Garden, died, and then was resurrected—given new  life!—God promises that the same is possible for us. The old dies. Then resurrection comes, and there is a new life to be lived. Now! Today!

And those who believe have that incredible opportunity for a new story, new hopes, and a new ending to their story. Yes, even a new past.

It is great mercy indeed.

What you’re worth to God

For you know that God paid a ransom to save you from the empty life you inherited from your ancestors. And the ransom he paid was not mere gold or silver. It was the precious blood of Christ, the sinless, spotless Lamb of God (1:18-19).

Have you, like me, spent a fair amount of time and money building a collection of something? In a former part of my life, it was Norman Rockwell collectibles. For you, it may be coins, stamps, antiques, paintings, jewelry. The value of my Rockwells lies only in what someone is willing to pay for each. If no one else wants it, its only value is to me—the emotional attachment I may have to it. (And that no longer exists. Anyone want some pieces, cheap?) Even real estate and stocks are subject to this principle: If no one wants to buy, it’s not worth much.

God wanted you. He wanted you so much that He paid the greatest possible price to ransom and rescue you. He gave Himself.

Christ suffered for our sins once for all time. He never sinned, but he died for sinners to bring you safely home to God (from 3:18).

God had a reason for paying your ransom. And remember, He paid it while you still were set against Him. Can you imagine parents paying kidnappers for the return of a child when the child declares openly that he does not want to come home? Some of you can imagine. Some of you have paid dearly to bring a child home that does not want to be home.

We were not worthy. But He wanted us back. So He paid the cost and claimed us. Gave us the chance at a new life. And now He intends to bring us safely home.

Under His care and protection

Long ago, God chose one nation as His own special people. Israel was blessed with the Lord’s presence, given special privilege, protection, and care. Today, God chooses all who believe and declares that we are His new Israel.

And as His people, we live under His care and protection. Look at a few of His promises:

4:19 You can trust your lives to Him because He will never fail you.

5:7  The Lord of the universe, the Almighty God, cares about you! Take your worries to Him.

5:10 He will restore, support, and strengthen you

In spite of those all-encompassing promises, there are many days we do not feel this identity, days we can hardly believe these things. Days when we believe, instead, the shadowy, distorted identities built on external or internal lies.

GOD SAYS THIS:  We are His own people. Known. Loved. Rescued. Cleansed. Given a new life. Cared for. Protected.

May the Spirit teach us to live it.

Let us hold tightly without wavering to the hope we affirm, for God can be trusted to keep his promise.
%d bloggers like this: